The Oracle Cloud ERP Implementation playbook includes a detailed project plan, a WBS for the implementation as well as a training plan. Are you about to kick off a project for implementing Oracle Cloud ERP?

Are you feeling the weight of responsibility on your shoulders?

Are you looking for practical information on how to structure your project?

Maybe I can help you … My name is Adrian Neumeyer, I’m a former IT Project Manager with 10 years of experience in ERP implementations (you can read my story here). I’m also the founder of Tactical Project Manager.

One of the products I recently launched is what I call “Project Playbooks”. These are step-by-step guides that break down typical projects into actionable steps, giving you a process on how to plan and manage certain common project types such as ERP implementations.

I recently started working on a Playbook for Oracle Cloud ERP Implementations.

You may be using any of the other names like Oracle Fusion.

It is the web-based (SaaS) ERP within the Oracle business applications segment.

Long story short: We are the process of building a very practical “Implementation Playbook” for Oracle Fusion. I’m getting help from a super-smart and very experienced Oracle ERP consultant, who has been implementing Oracle ERP for many years.

You can learn more about the Oracle ERP Playbook here:

What is the Oracle Cloud ERP Implementation Playbook?

Who is the Playbook for?

A Sneak Peek at the Oracle Cloud Implementation ERP Playbook

Here you can see what the Playbook actually looks like and what materials are included. Again, it’s an Excel consisting of multiple sheets with each sheet carrying a particular plan or template.

This Gantt Chart has been prepared as per the normal Oracle Fusion Implementation cycle of a large-scale organization taking into mind all the possible delays faced during the implementation phases. It can be modified depending on the client workforce and on the modules/areas being implemented. Note that this Gantt Chart plan is developed based on an ERP team consisting of 7 to 10 members who carry out their modular responsibilities in parallel.

The Project Build Plan sheet is used for the sequential listing of all the project phases and tasks required for a successful ERP implementation. Over 1800 tasks included! As a Project Manager, you need to ensure all the crucial project related discussions, system configuration steps, team planning and allocation factors, project deliverables and training sessions are part of the plan to estimate realistic and accurate project timelines.

This sheet is categorized into high level and sublevel project phases with sequential numbering for better bifurcation and clarity of the project related tasks. Listing of phase wise tasks in a structured and orderly manner to assist in prioritizing which aspects would require more focus on what stage of the project. Description column lists the purpose, best practices and recommendations for the project tasks.

In the screenshot above you only see the setup tasks for the Financials module. Don’t worry, the Build Plan that you get with the Playbook does cover ALL MODULES including Finance, Supply Chain and Inventory Management and Procurement.

The training plan includes a complete training agenda for all modules, including Finance, Supply Chain and Inventory Management, Procurement and Manufacturing. You may not be using all functionality and some processes may not be relevant for you. Not a problem. Just remove the sections not relevant to you, and add any company-specific processes you’d like to train your users for! 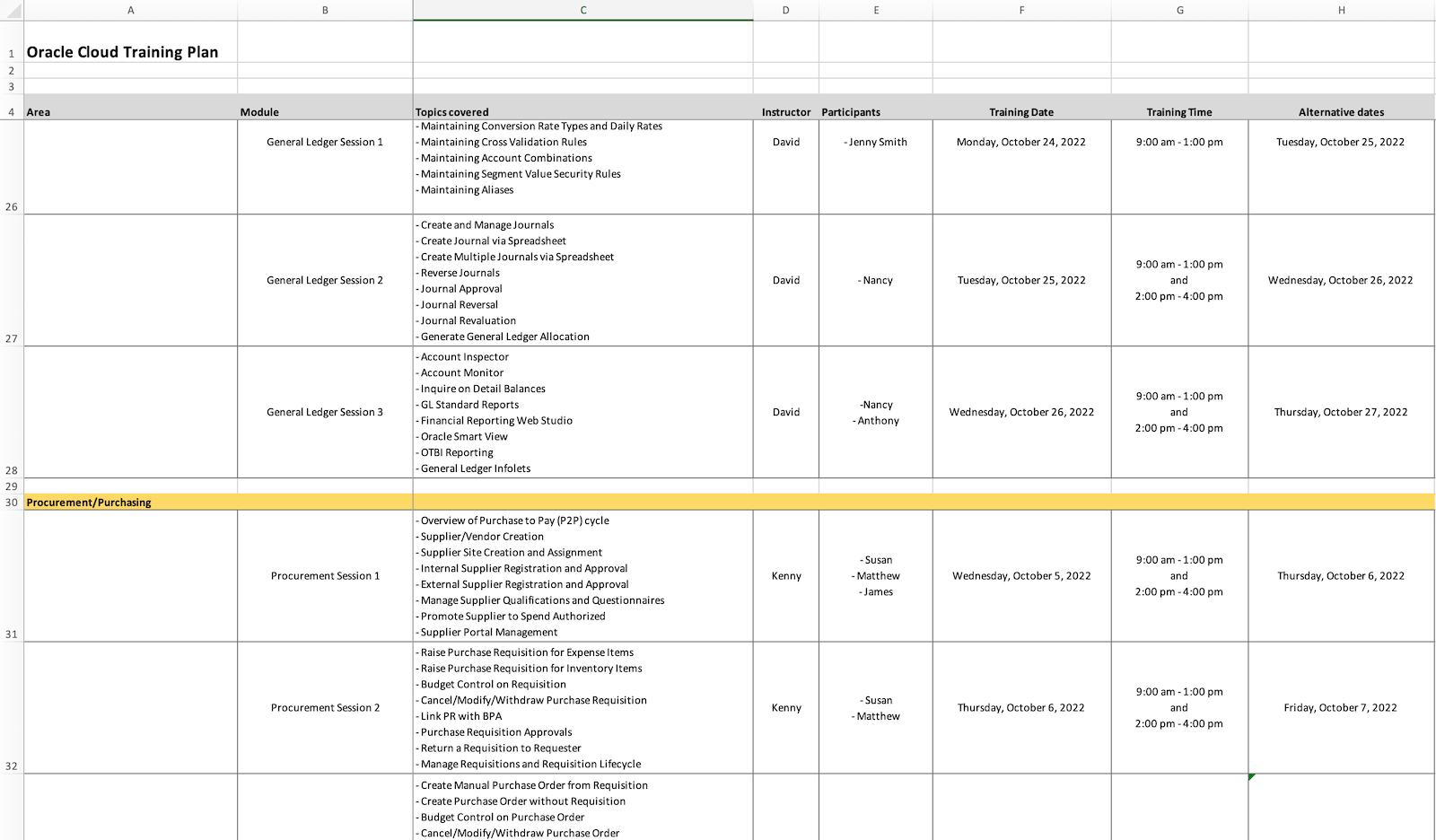 All the worksheets shown above are included in the Oracle Cloud ERP Implementation Playbook! Hi, I’m Adrian Neumeyer, founder and CEO of Tactical Project Manager. I have been working as a Senior IT Project Manager for the past ten years. Today my focus is to help people who manage projects — people like you! — by providing practical tips and time-saving tools. Connect with me on LinkedIn.

Got a question about this product?
Ask your question here!
I usually respond within 24 hours, except on weekends.

The Importance of Change Management in Oracle Cloud ERP Implementations: A Case Study

The Project: The project involved two service industry sectors; Logistics and Visa Facilitation Services. This was a transformation from Oracle E-Business Suite (EBS) and other customized in-house systems to Oracle Fusion Cloud.

The primary objectives of the project were integrated financial and management reporting, integration with a bank’s payment system, review and resolution of pain points faced by the business in their normal operations and revamping of the old out-of-date reporting approach to a systemized and standardized one.

Oracle Cloud ERP implementations often bring drastic changes on an organizational level. In many cases, people are not willing to adapt to this change because of various reasons. Employees are very accustomed to the previous processes they have been following for years. Workflows are built into their mind with the passage of time. Some of the major challenges faced by implementors are resistance in employees to change and lack of technological literacy of senior employees to adapt to the redesigned process flows. This affects employees’ engagement and motivational level for crucial sessions.

There is no better way to tackle change management than being upfront and honest to the employees about all the possible structural and process changes. Senior management needs to ensure that employees are motivated enough to adhere to the changes. Implementations often involve quite a lot of effort from the workforce so companies often announce performance-based incentive schemes to keep the workforce driven and excited. From an implementor’s perspective, it is highly crucial to keep all the discussions focused and engaging. Oftentimes, the implementor has to play the role of a teacher with a coherent explanation power and logical reasoning. Any process change should be presented in a way that is understandable by a common business user with clear advantages and disadvantages. Sometimes, multiple solutions and workarounds are suggested for a single process to make sure that users are aware of all the possible ways to cater to a scenario.

Let’s take a real-life example of a major change at the organization. A company’s existing 1-segment chart of accounts (CoA) consisting of Parent and Child accounts was restructured into a 7-segment (excluding the segments defined for future use) chart of accounts. Important new segments introduced in the structure were Business Division, Location, Department and Intercompany.

Business Division and Location were incorporated as management wanted Division wise and Location wise profit and loss. What it meant was, most of the revenues and expenses would now be recorded with relevant business division and location rather than bifurcating the expenses segment wise at later stages. Primary purpose of department segment was to allocate costs among departments for cost analysis. Intercompany segment was a great value addition. The previous CoA included a separate GL account for each intercompany. The new CoA would have one GL account for Intercompany transactions while the relevant intercompany would be tagged in the Intercompany segment.

Implementations are very costly and it is important to cover all the possible future needs to avoid any major structural changes later on. The need for this restructuring came up after gathering all the current and future business and reporting requirements. On the surface, it sure looks like that end users have to put more efforts into this. An employee previously entering a manual journal with only the GL Account now has to consider the whole segment wise account combination. This was a major cause of demotivation for the employees.

As an implementor, the major problem here is to convince both parties (management and end-users) that this change will actually be beneficial in the long term once it is adapted properly and you cannot do that without comprehensive educational sessions and solid logical arguments defining all the benefits that this restructuring would bring. Multiple sessions were conducted demonstrating the integrated system functionalities to make sure that users are aware that they don’t have to fill the account combination throughout the whole cycles. These demonstrations also helped prove the point; account combinations on purchase requisitions being auto picked based on users entering minimal item information, combination being auto populated based on intercompany transaction types and combination being auto picked based on the defined Distribution Sets. These pre-defined mappings not only make the entries easier but also reduce the chances of error in data entry and future reconciliation issues.

In conclusion, change management is inevitable, you’re going to face this at every stage of the project. Every implementor needs to have sound knowledge of the ERP system and business processes to ensure that users handle the structural changes as smoothly as possible. Strong interpersonal skills, explanation skill and people management skills play a key role in tackling change management.