Stakeholders is the term used to describe those who have an interest in, or concern for, the activities of a project or business (see also our PM glossary). Stakeholders vary depending on a wide number of factors therefore within a construction project there are many different possible stakeholders.

No matter what industry, it is important that the stakeholders of all projects are recognised in order to engage and involve them within the project progress, allowing project constraints, as well as threats to its success, to be recognised, understood and appropriately dealt with.

Construction companies and their projects have a number of different stakeholders therefore within this article I will give an overview of both the internal and external stakeholder groups who are impacted both directly and indirectly, respectively.

Each stakeholder has different levels of interest and influence on a project which is important for the project team to be aware of.

Typically, for projects being undertaken within the construction industry, there are a number of likely stakeholders. Some, or all, of which may be applicable to any one project. These potential stakeholders are as follows:

The client, often referred to as the sponsor, will generally have the highest levels of both interest and influence on the project as they directly own the project and therefore finance it.

Project clients will be positively impacted by the project if it is a success yet there is potential for a negative impact if the cost, schedule or end quality of the project do not meet expectations, causing the project to fail.

This stakeholder group will design the construction aspects of the project but are doing so in order to meet the requirements of the client. As a result, they will have less influence on the project than the previously mentioned stakeholders.

Regardless, they remain highly interested in the project as it’s success is a direct and positive reflection on their business, with the opposite being said for its failure.

Project designers are known as positive stakeholders as they are likely to have a favourable impact on project success and without them the project would not be able to happen.

Subcontractors are those working within a project who have been hired by the main contractor to undertake areas of work which are perhaps out-with their expertise i.e. an electrician.

This stakeholder group would have a low level of influence over the project as they are simply hired to undertake work and if disputed, the main contractor will simply find an alternative service provider.

Subcontractors are internal stakeholders as they are directly involved within the project and its success would be a positive reflection of their work resulting in a high level of stakeholder interest.

Subcontractors are known as positive stakeholders as their work is likely to have a favourable impact on the project outcome and without their presence the project would come to a halt.

People employed within the project in any way are internal stakeholders as they are directly impacted by its activities.

Employees are positive stakeholders as they have a favorable impact on the project as without them no project activities would go ahead.

Those within this stakeholder group will have a high level of interest in the project’s success as it is a direct reflection of their abilities.

The suppliers of a construction project are positive stakeholders as their presence has a favorable impact on the project and they are likely to gain from the success of a project, perhaps in the form of repeat business.

Suppliers are another direct stakeholder as a result of them being linked internally within the project activities.

Suppliers are likely to have a high level of interest in whether or not a project succeeds as they will be keen to continue business with the contractors.

Suppliers with much competition will have less influence on any project.

It is likely that government authorities such as local councils or state regulators would be both extremely interested and influential in a construction project.

Government authorities are external stakeholders and are often responsible for the approval or denial of planning permission and permits for construction. They are therefore largely influential.

Government bodies are likely to be positive stakeholders as their ability to grant permission means they have a favorable impact on the project’s proceedings, therefore making them crucial to the project’s success.

Wherever a construction project is taking place, there will be residents local to the area who are indirectly impacted by it.
Local residents will likely have a high level of interest in the project however are unlikely to have much influence over its decisions.

There have however been some cases that show the influence of local residents can be powerful.

In 2016 in Virginia, US, local residents fought against the construction of a “mysterious” building which they believed did not meet the requirements of what they had been informed the building’s use would be.

The company did however retaliate, claiming that the plans for the building and its use were legitimate however construction was later suspended which begs the question of “did the local residents influence this decision?”.

This stakeholder group is one that can take many different forms and is indirectly impacted by the activities within a construction project as a result of a conflict of interest.

Such groups are negative stakeholders as their presence is likely to have a detrimental impact on the project as a result of their protest against activities.

There are a number of variables that affect the levels of interest and influence these groups will hold such as the size of the group and the justification behind the protest.

If the group is large enough and the cause powerful enough, these stakeholders can be extremely influential in the continuation of construction projects.

These stakeholders can be very powerful which was seen in a real-life scenario in France in February of 2021 when hundreds of activists protested against a proposed construction project, putting pressure on the construction company to revaluate their plans.

Labour unions are an indirect stakeholder of construction projects as they are not directly involved within the project, nor are they interested much in individual projects unless they are given reason to be.

Instead, they are concerned with projects which may be in breach of employee rights laws and would therefore only involve themselves in order to protect those rights.

They can therefore be very influential towards a project, should it not be working in accordance with the law, and have the potential to negatively impact the progression of a project until worker’s rights are protected.

An example of labor unions being hugely influential towards a project was in 2018 in Washington, US. There was a case where construction workers went on strike as a result of poor payment packages. This strike was supported by the union who fought for the increase in wages for workers, taking on the role of negotiator with the construction company and therefore giving them no choice but to increase payments in order to have their workforce return to proceed with the project.

Without the presence of the union, the workers would have had no financial or legal support therefore would likely have remained working for the initial low rates.

There are different professional bodies throughout the construction industries of all countries, such as the Chartered Institute of Building Services Engineering in the UK or the American Institute of Architects.

These are indirect stakeholders as they do not work on each individual project however are connected as they provide guidance on how different types of construction projects should be undertaken.

Professional bodies have low interest in individual projects yet are highly influential to projects as they outline how the project must be managed, and in accordance with what guidelines.

Those who own businesses local to the area of a construction project are likely to be indirectly impacted by the project and its activities.

There is potential for both positive and negative impact to be faced however the most common circumstance is that of the business owners facing increased revenue and custom as a result of the increased footfall in the area from project workers and ultimately the building’s end users.

Such stakeholders would be extremely interested in the status of construction projects however would likely have little influence on them and their progression.

End users are likely to have a large influence on aspects of the project including the planning and design phase as without the customer demand the projects are unlikely to be approved.

The plans for the construction project are therefore influenced by the customer requirements.

Other areas of the project may however not find this stakeholder group to be quite so influential.

They are direct and positive stakeholders as the loss of their presence would result in a detrimental impact on the project.

Stakeholders have always and will always be present within construction projects therefore it is important to know who they are, why they should be managed and how to manage them.

Project stakeholders are specific to individual projects, as is their level of influence, therefore stakeholder engagement is crucial to reduce the impact of any negative influence they may have.

Keeping a close eye on stakeholders is important to project success and is becoming more so with the growth of social media.

The power of social media has allowed the potential for much higher levels of engagement to be met by negative stakeholders, such as activists, as a result of the ease of information sharing which results in larger numbers of people hearing about, and supporting, their cause.

This increased support has the potential to create far larger levels of influence, risking project success.

It is therefore extremely important that all stakeholders, regardless of their level of influence and interest, are monitored as you never know when these levels may change!

Sara is currently studying towards her Masters in Project Management at Robert Gordon University in Scotland. Sara is passionate about equality and would like to see more women in project management positions, even dedicating her undergraduate thesis to researching the barriers faced by females in attaining the role. In her free time Sara can be found walking her dog in the countryside or competing in half marathons, hoping to one day complete a full one.

Don't miss these other articles

Among readers of Tactical Project Manager, Velociteach has received excellent feedback as a training provider. Therefore we recommend you take a look at their PMP courses. 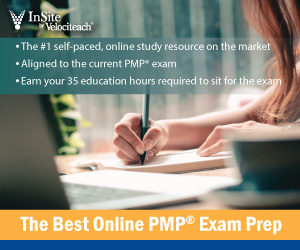 This is an affiliate link, meaning we earn a small commission if you enroll in one of their programs but there is no extra cost to you.

Improve your project management skills through our weekly tips.